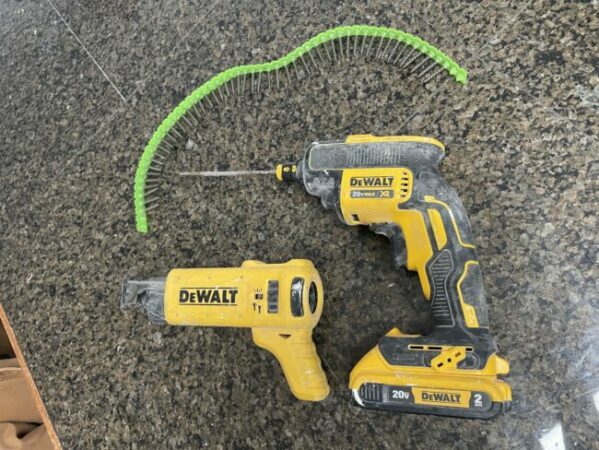 Last year I had a relatively large drywall job to do and I wanted to find ways to make everything I do more efficient.  I decided to invest in the Dewalt Automatic Drywall Screw Gun to see how it would do.  Today I’m sharing my experience using it as well as some tips for you if you decide to grab one or already own one!

The main thing to know about an automatic drywall screw gun is that it requires collated drywall screws.  Collated drywall screws are attached to a plastic strip in order for the auto-feed function to work.  It uses the forward and backward motion of the drill to re-feed the next screw.  As you pull the trigger and push the screw gun into the wall, it automatically catches the drywall screw and screws it in.  As you pull away from the wall, a spring mechanism inside the attachment resets the collated strip to feed the next screw.

The drywall screw gun is made up of a few main components, the Dewalt XR Drywall Screw Gun, the 6″ drywall bit, and the collated magazine.

Once the bit is set into the gun, you will attach the collated magazine.  There are two black buttons on each side of the magazine which need to be pressed simultaneously in order to lock it into the gun.

Once everything is attached securely, it’s a simple process to get down.

How To Use The Dewalt Automatic Drywall Screw Gun

When you first begin using it it’s a simple pull the trigger and press into the wall (on the studs).  Remember that the slight force you use to push the magazine into the wall is what refeeds the gun.

On the side of the magazine, there is a dial in which you are able to set the head depth of the drywall screw.  It might take a few times to get it to where you want it, but after that it’s smooth!

A big tip for you (I’ve been using this Automatic Drywall Gun for a year now), make sure your studs are marked.  There’s always a chance you will miss a stud every once in a while.  In order to back the screw out you can do one of two things:

1.  Remove the collated magazine attachment and reverse the drill.
2.  Keep your regular screw gun handy for a quick reversal.

Overall, the Dewalt Automatic Drywall Screw gun has been a big game changer for my efficiency.  I do recommend it to anyone that is in the drywall or general contracting field.  Time is money, and this thing will save you time!